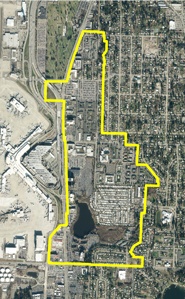 About the City Center Plan
In 1999 the City completed a subarea plan for the City's central commercial core. The map at the right shows the area of the City covered by the City Center Plan, as it appeared in an aerial photo taken in 1999. The plan identifies transportation system improvements in the area, as well as design standards for new development in the area that the City hopes will result in high quality development.  The design standards can be found in the Zoning Code, Chapter 15.35.

Click on the links here to see an artist's rendering of future development along Main St., and one of the City Center at build out, which includes some familiar existing buildings such as the black office towers (formerly known as the "Kilroy Towers"), the Hilton Hotel, and the Holiday Inn.

In December 2010 the City amended the City Center Plan [PDF] to incorporate some provisions of the SeaTac/Airport Station Area Action Plan, which was rescinded at the same time. The amendments included:

In addition to downloading the Plan from this page, copies are also available at the Planning Division at City Hall.

Free viewers are required for some of the attached documents.
They can be downloaded by clicking on the icons below.